Each year The Lancet Countdown: Tracking Progress on Health and Climate Change, an international research collaboration that monitors and reports annually on the relationship between health and climate, and its implications for national governments, releases an annual report. Country specific briefs alongside the Global Report, present relevant findings and highlights the key threats and opportunities climate change poses for health. Each Friday in January, we will be delving deeper, 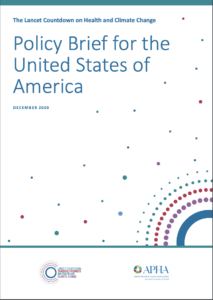 highlighting four critical insights showcased in the 2020 US Brief and recommended actions to protect health. Read the US brief here.

The Lancet Countdown: Tracking Progress on Health and Climate Change was launched following the 2015 Lancet Commission on Health and Climate Change, which concluded that unmitigated climate change would undermine 50 years of public health gains, but that responding to climate change could represent “the greatest global health opportunity of the 21st century.” The companion U.S. brief released alongside the global report aims to draw out the most nationally relevant findings to highlight the key threats and opportunities climate change poses for health in the US. The US brief also includes a list of policy recommendations that aim to protect human health from the climate crisis. Each year a launch event is held to amplify the findings of the Global Report and the country specific brief. The 2020 Lancet Countdown U.S launch event was held virtual on December 3rd. You can view the full recording of the event here.

The virtual launch begins with a palpable amount of optimism and resolution. Director of APHA’s for the Center for Climate, Health & Equity, Surili Sutaria Patel begins with a bright and brief introduction. Without hesitation Surili expresses with understandable urgency the converging crises present in the United States today. In just the past year, the COVID-19 pandemic, the emergence of a slow-building rhetoric of intolerance toward systemic racial injustices, inequality and climate change have all made their way into the spotlight. Undoubtedly, she is setting the stage for the conversation we all should be having moving into 2021 – on the heels of a global pandemic that rocked not only our nation, but the world. The correlation between climate change and health has been a longstanding debate of relevance and political correctness set against the dim backdrop of communities affected by the repercussions of not taking these conversations seriously enough, sooner. Even within the first few minutes of the launch, it is understood what the real focus of today’s discussion is – action.

What is the Lancet Countdown on Health and Climate Change?

In short, it’s an international research collaboration supported by 70 institutions, organizations and centers with the goal of monitoring the relationship between health, climate and what this could mean for our future. The report is meant to outline what we know about the implications of climate change on health, the current, most pressing concerns and recommendations for response to these threats. Threats like, increasing greenhouse gas (GHG) emissions and rising global temperatures are simply the beginning – catalysts for the devastating ripple effects we may be feeling for decades to come. On the surface and to the average individual who may be more focused on the stress of day-to-day life, the concept of climate change may seem unremarkable in comparison. However, even mundane stressors that hide the underbelly of habitual and systemic disregard for our environment, have their roots in the conversation between climate change and health. This conversation encompasses many of these same root causes – health disparity, the nations’ economy, socioeconomic injustice, the low-income working class, job opportunities, access to healthcare and the overall health and well-being of our communities.

It may just seem like a conversation about “the melting polar ice caps” but let’s take a moment to unpack what that really means. The Lancet’s U.S. Policy Brief outlines several “critical insights” geared at painting the picture of the U.S.’s trajectory related to the health implications of climate change. In each blog post, we’ll be exploring a few of these to understand what they mean and most importantly, what they mean for the health of our communities moving forward.